Yule Log - A Life in Balance by Barb Hoyer 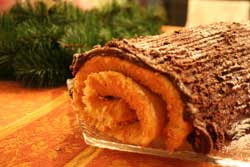 Being approximately half-British, nothing says Christmas more to me than a Yule Log.

I’ve only made a few and that was a long time ago – before kids. I felt a bit anxious about tackling a sponge cake for Christmas dessert, but it turned out to be easy to make.

My sponge cake recipe came from The Joy of Cooking

, but the cake only needed to bake for about 10 to 12 minutes in a jelly roll pan. Do make sure that you use wax paper or parchment paper under the cake to facilitate removal from the pan.

The whipped filling recipe also came from The Joy of Cooking

. Basically it was one cup of heavy whipping cream with vanilla extract and confectioner’s sugar to taste. I went on the less sweet side because of the cake and the icing. Before putting the filling on the cake, I spooned a thin layer of strawberry jam, warmed for easier spreading. The kids liked finding strawberries inside the Yule Log.

which involves boiling a simple sugar syrup to the soft-ball stage. Thanks to a few interruptions and condensation inside the candy thermometer, I ended up overcooking the sugar. However, I still had the melted chocolate which I was able to use in a recipe from The Joy of Cooking

. But, it wasn’t enough icing. And I was out of baking chocolate squares.

After drawing lines for bark in the chocolate frosting, I sprinkled a little confectioner’s sugar over top for snow.

We’re on our way to a family tradition!

Disclosure: I am an Amazon Associate