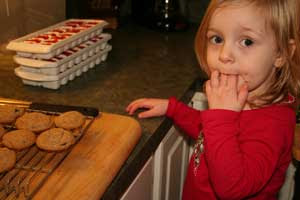 We’re low on snacks this week. Thursday’s shopping trip provided the kids with apples and bananas, but nothing else.

Yesterday I made a double batch of whole wheat chocolate chip cookie dough and a double batch of oatmeal cinnamon cookie dough. Both recipes came from the back of a Hershey’s bag of chips. When I doubled the recipes, I used half of the butter and eggs called for and substituted margarine and soy flour/water for the rest. I also threw in 2 T. of bran in the oatmeal cookies. I was very happy with the results.

In the back of the picture above are ice cube trays of pureed red pepper. I found bags of red peppers in the reduced section at Gentile’s last week. I got the idea to steam and puree the peppers from Jessica Seinfeld’s Deceptively Delicious. It’s very easy to add the purees to foods the kids like such as spaghetti sauce. The red pepper puree is also good for the baby who apparently prefers veggies like red peppers and sweet potatoes over the sweet stuff like bananas and pears. 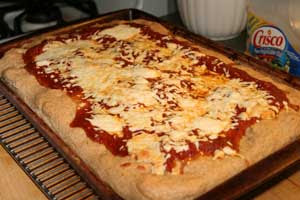 My other big job was making pizza dough in the bread machine. I use the recipe from Laine’s list, substituting whole wheat flour for the white flour (note: I couldn’t find the recipe but it should be there). The first batch of dough became lunch. I tried prebaking the dough for 15 minutes at 425 before baking it for 10 minutes with the sauce and cheese. I got rave reviews. The second batch of dough is in the freezer for lunch on Monday.