real food wednesdays: kale and garlic sauteed in lard - A Life in Balance by Barb Hoyer 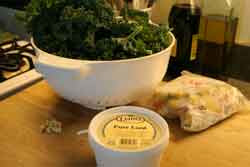 One of my favorite veggies is sauteed kale. This year we had a few volunteers come up in our vegetable garden allowing me to have sauteed kale during the summer a few times a month.

Normally, I saute the kale in bacon grease, but this time I decided to try the lard that I had just found at the Farmers Market in Strafford.

After I had sauteed the kale a little, I added in a few cloves of garlic. 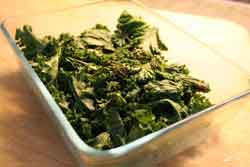 This post is part of Kelly the Kitchen Kop’s Real Food Wednesdays. Also What’s On Your Plate at Good Cheap Eats.