This week’s nature walk was at a local hidden gem, the Hildacy Farm Preserve. The farm was originally part of a land grant from William Penn. In 1981 the Natural Lands Trust received the farm as a donation and then established their regional headquarters at the site.

I had only been to Hildacy two times before today, and I was anxious to go back and share it with my children. We were joined by two other families and the kids had fun exploring the woods and the meadow. I was so busy talking to the other moms, keeping track of my little guys and looking for things to share with the kids that I didn’t take many pictures. 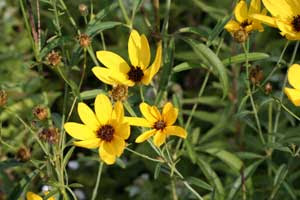 We found this flower next to the parking lot. I’m not sure what it is, but I suspect that it’s in the Cosmos family. I’m hoping to id the flower before we return to Hildacy next week. 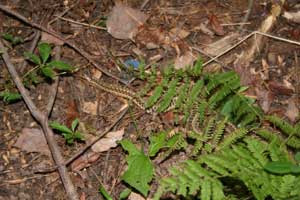 We almost stepped on this snake! The kids think it’s a garter snake. I apologize for the look of the picture. I was attempting to lean over with my baby in the Bjorn, and I wasn’t sure how much time I had to take a picture. I had the same issue with the snake we found. This little baby snake was found next to the creek. The other one above was just up the hill from the creek in some leaf litter.

The last thing I noticed about our visit to Hildacy was the birds. Some of the birds we were able to identify, but others remained a mystery. I have a Birding by Ear: Eastern/Central (Peterson Field Guides)

that I’ll be pulling out to help us to identify more birds. Hildacy also has a birding checklist available on their site.