Honey Plum Preserves - A Life in Balance by Barb Hoyer 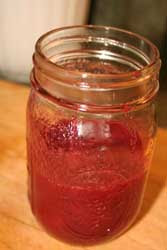 I had several pounds of plums that I needed to take care of today. They got lost during my focus on pickles this past week. I froze the majority of the plums to deal with them later. I took the ones that were going bad, cut out the bad spots, and made Honey-sweetened Plum Preserves from Rodale’s Stocking Up. I added more plums than the recipe called for simply because I think honey can have a very strong taste. The preserves turned out perfectly!

Here’s the recipe prepared as a local plum jam.

Here’s a few other honey and plum recipes: